Snowden at SXSW: The NSA is ‘setting fire to the future of the Internet’

“The NSA … they’re setting fire to the future of the Internet,” Snowden said. “The result has been an adversarial Internet.”

Snowden spoke via teleconference from Russia — where he was granted asylum from U.S. espionage charges — through seven proxies, organizers said. A green screen behind Snowden projected an image of the First Amendment.

“It’s nothing we asked for,” Snowden said of the NSA’s mass surveillance. “It’s not something we wanted.”

“These things are improving national security,” Snowden said. “We rely on the ability to trust our communications.” 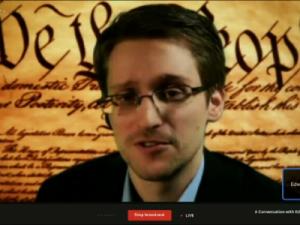 People should be able to open emails without fear of spying, “whether they be journalists or activists,” Snowden said.

He said tips that could have alerted authorities to accused Boston Marathon bomber Tamerlan Tsarnaev and Umar Farouk Abdulmutallab, the so-called underwear bomber, were missed as a result.

“What did we get from bulk collections?” Snowden said. “We got nothing.”

Snowden also criticized U.S. intelligence officials like James Clapper, the director of national intelligence, for “cheering” the NSA rather than holding it accountable.

“We have an oversight that could work,” Snowden said. “The overseers aren’t interested in oversight.”

The session — billed as “A Virtual Conversation with Edward Snowden” — was moderated by Ben Wizner, the director of the American Civil Liberties Union’s Speech, Privacy & Technology Project and Snowden’s legal advisor.

“If he were here in the United States he would be in a solitary cell,” Wizner said.

Snowden’s appearance at SXSW comes two days after WikiLeaks founder Julian Assange gave a similar speech to the conference from the Ecuadorian Embassy in London, where he has been living in asylum.

“I am deeply troubled to learn that you have invited Edward Snowden to address SXSW on privacy, surveillance, and online monitoring in the United States,” Pompeo wrote. “Certainly an organization of your caliber can attract experts on these topics with knowledge superior to a man who was hired as a systems administrator and whose only apparent qualification is his willingness to steal from his own government and then flee to that beacon of First Amendment freedoms, the Russia of Vladimir Putin.”

Snowden, though, said he did what he did to protect the First Amendment.

“Would I do this again? The answer is absolutely yes,” Snowden said. “I took an oath to support and defend the Constitution and I saw that the Constitution was violated on a massive scale.”

Today’s free newsletter is supported completely from royalties earned on the sale of the books described below. Please help keep us going by buying the books if you haven’t already. Also, AND ESPECIALLY, please share with all your social networks and ask your friends and contacts to do the same. You are appreciated.

So, who does that leave to protect you, your life, property and family?

The one and only answer is: YOU

This Handbook is intended to help you exercise that right and meet that responsibility.

Combat Shooter’s Handbook is available from Amazon.com in both paperback and Kindle versions.

The Betrayed: On Warriors, Cowboys and Other Misfits.  Click here to buy the paperback version from Land & Livestock International’s Rancher Supply aStore.

This guide is a detailed book review of sorts, but perhaps it would be more accurately described as an abstract that condenses 864 pages of detail into 189 pages of concentrated information. No more excuses for failing to properly plan your grazing. The booklet is available from Amazon.com in both soft cover and Kendall versions. Click here.

Land and Livestock International, Inc. is a leading agribusiness management firm providing a complete line of services to the range livestock industry. We believe that private property is the foundation of America. Private property and free markets go hand in hand—without property there is no freedom. We also believe that free markets, not government intervention, hold the key to natural resource conservation and environmental preservation. No government bureaucrat can (or will) understand and treat the land with as much respect as its owner. The bureaucrat simply does not have the same motives as does the owner of a capital interest in the property. Our specialty is the working livestock ranch simply because there are so many very good reasons for owning such a property. We provide educational, management and consulting services with a focus on ecologically and financially sustainable land management that will enhance natural processes (water and mineral cycles, energy flow and community dynamics) while enhancing profits and steadily building wealth.
View all posts by Land & Livestock Interntional, Inc. →
This entry was posted in Constitutional Government, Police State, Privacy & Asset Protection, Whistle Blowers and tagged 4th Amendment, Police state, privacty, Snowden. Bookmark the permalink.

2 Responses to Snowden at SXSW: The NSA is ‘setting fire to the future of the Internet’