Matthews pressed Trump to define his pro-life position, to which Trump responded with hemming, hawing, and ultimately an idea that women who might violate a future ban on abortion should be subject to “some form of punishment, yeah.”

Abortion is murder, period. Is murder a crime to be punished? All civilized societies seem to think so.

So, who could be more guilty than the woman herself? The others (the father, the doctor, the neighbor that drove her to the clinic, etc) are also guilty of being accomplices and co-conspirators and should also be punished accordingly.

And incidentally, murder has never been (and is not supposed to be) a FedGov problem. It is handled by the individual Colonies. — jtl, 419 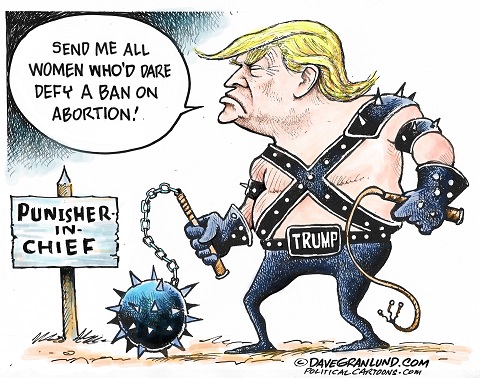 During a Wednesday interview with MSNBC’s Chris Matthews, Republican frontrunner Donald Trump stepped on his own tongue. Trump, whose “devil-may-care” attitude towards commenting on policy issues about which he has little understanding, pronounced himself “pro-life.” Unfortunately for Trump, he’d caught Matthews, long relegated to the role of MSNBC’s drunk uncle, on one of his “good” days.

Matthews pressed Trump to define his pro-life position, to which Trump responded with hemming, hawing, and ultimately an idea that women who might violate a future ban on abortion should be subject to “some form of punishment, yeah.”

Trump’s remarks, as is so often the case with a hip-shooter like “The Donald,” reflect a position shared by almost no one. While the anti-life forces shrieked bloody murder, pro-life groups quickly moved to distance themselves from his draconian “plan.”

Of course, Trump later “walked back” the comments; evidently forgetting that only Democrats are allowed to “walk” anything anywhere. The long-term blowback, should there be any, remains to be seen. But the short-term fallout is predictably noisy — and predictably wrong.

Lost in the hue and cry over statements made by one man was the deeper — and very real — problem. Whatever Trump may or may not believe about abortion, he blundered into what strikes me as the most ridiculous “third rail” issue in American politics. The anti-life movement, including Democrat candidates Hillary Clinton and Senator Bernie Sanders — both of whom eagerly piled on their condemnatory conflation of Trump and all pro-life people — treats abortion as somehow sacrosanct. Indeed, anyone who in any way threatens the “right” to kill a child as a matter of convenience learns the same lesson Trump now knows: the holiest of liberal issues is among the unholiest of crimes.

We now live in a country in which the easiest path to the highest office in the land is to stand up for an act which contravenes the essence of humanity, morality and even biology. An entire major political party predicates its presidential qualifications on a candidate’s agreement with Margaret Sanger, a eugenicist who believed blacks to be “human weeds” and “human waste” whom she wished to “exterminate.”

The Democrats vie for the endorsement of her organization, Planned Parenthood, the same people who gifted humanity with “physicians” like Kermit Gosnell. What Trump learned, albeit through his own garrulousness, is that the anti-life movement, now among the most powerful blocs in the Democrat tent, has replaced “do no harm” with “dilate and extract.”

Trump’s blather certainly doesn’t represent the pro-life movement. I’m not certain it represents Trump’s own thoughts on the issue, whatever they might be.

However, if the anti-life horde insists on using his words to smear everyone who recognizes abortion for what it is — a crime — then it’s perfectly reasonable to point out that they not only created monsters like Gosnell, they endorsed what he did.

Since 1973, nearly 60 million American children have met their end in abattoirs like the one Gosnell built. That’s the equivalent of the combined populations of California and New York. It’s telling that the same anti-lifers who feign fury over Trump’s off-the-cuff remarks about “punishment” don’t seem bothered by that statistic at all.

Land and Livestock International, Inc. is a leading agribusiness management firm providing a complete line of services to the range livestock industry. We believe that private property is the foundation of America. Private property and free markets go hand in hand—without property there is no freedom. We also believe that free markets, not government intervention, hold the key to natural resource conservation and environmental preservation. No government bureaucrat can (or will) understand and treat the land with as much respect as its owner. The bureaucrat simply does not have the same motives as does the owner of a capital interest in the property. Our specialty is the working livestock ranch simply because there are so many very good reasons for owning such a property. We provide educational, management and consulting services with a focus on ecologically and financially sustainable land management that will enhance natural processes (water and mineral cycles, energy flow and community dynamics) while enhancing profits and steadily building wealth.
View all posts by Land & Livestock Interntional, Inc. →
This entry was posted in Abortion is Murder and tagged abortion, abortion is murder, Donald Trump, Trump. Bookmark the permalink.