In West, Feds control land — and lots of jobs

“How can somebody who’s managing my public lands tell me I can’t set foot on them?” asked Briels. “How can they close a road I’ve been using for years, and dictate to the ranchers how they’re going to make their living?”

Good questions with a simple solution–abolish the FedGov.

Read to the end and you will find out that cowboys are not dumb. We read the likes of Frederic Bastiat and Henry Hazlitt — jtl, 419 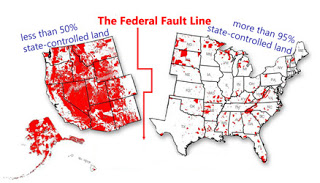 by Mitchell Hartman  via The Westerner

The  occupation of the Malheur Wildlife Refuge exposed deep conflicts and contradictions in a region that prizes self-reliance and the private sector, even as many residents rely on government for their jobs and livelihoods.
Former Burns fire chief Chris Briels bridles at the gradual expansion of federal influence over the region’s land and economy in the past several decades. He grew up on farms and ranches in Colorado and has lived in the Harney County area for more than 30 years.
“How can somebody who’s managing my public lands tell me I can’t set foot on them?” asked Briels. “How can they close a road I’ve been using for years, and dictate to the ranchers how they’re going to make their living?”
Briels helped organized a local support group — called the Committee of Safety — to defend the Bundys and their followers during the refuge occupation. He agrees with the Bundys that the federal government has no right to own most of the land here, though he readily acknowledges that a lot of his neighbors make their living working for government agencies — for instance, overseeing grazing rights and conservation programs, or fighting wildfires.
“When I moved here in 1978, there weren’t many forest service people or BLM people here,” he said. “But when the environmentalists and everybody shut the logging down, and people quit using our natural resources, there were more and more who went to work for BLM and the forest service. The people had to have jobs.”
But Briels said he’d readily sacrifice the government jobs and offices in the region—to wrest control of the land from the federal government. He said that would allow local residents “to take the resources that are within the county, and manage them by people that live here in the county, to where all of the money stayed here, it didn’t all go to Washington, D.C., to make a sustained income for our people.”
The economic impact of this would indeed be profound.
According to the Oregon Employment Department, right now, 49 percent of Harney County jobs are in the public sector—in federal, state and local government. Only rural Wheeler County has a higher percentage. In contrast, the urban Portland metro area has 13.7 percent government employment. Eugene—home to the University of Oregon—has 19.7 percent.
“In general, we see a correlation where the higher the percentage of public land, the higher the employment base would be in public employment,” said regional economist Damon Runberg, who is based in Bend, about 120 miles west of Burns. There is a comparable concentration of public-sector jobs in rural counties in neighboring Idaho and Washington, according to data provided by those states’  employment departments.
“You see a lot of families split,” said Runberg of rural Oregonians. “One person in the household will be working in agriculture, while someone else has a more traditional payroll job in one of the cities, or is employed in a government agency—whether that’s the school district, or a federal or state agency.”
In the small farming town of Goldendale, Washington, fourth-generation rancher Neal Slater and many of his neighbors straddle this public-private economic divide. Goldendale is in Klickitat County, where approximately one in four jobs is in the public sector. Slater took a break from teaching horsemanship and rope-skills at a summer rodeo Bible camp for teenagers at the Goldendale fairgrounds to explain his views.
“We’ve got people putting rules and regulations in place that have nothing to do–no attachment–with the land,” said Slater. “Anybody who’s going to regulate, they should have been in the business for a certain amount of time themselves, so they understand it.”
Slater identifies himself as a conservative Republican, and he shares the constitutional position of Chris Briels and the Bundys–that the federal government shouldn’t own or control most land in the West.
But he also appreciates the help he gets for his own ranch from local staff of the U.S. Department of Agriculture’s (USDA) Natural Resources Conservation Service (NRCS).
“In our government office there are really good people,” said Slater. “We have several farmers’ wives that work there to keep their farms going, and they’re great to work with. With programs that are government-funded, some of them I wonder about, but some are really good. We’ve drilled three wells with (NRCS) assistance, that we have solar panels on. We’ve got water where we didn’t have water. That sort of funding really does help—to do some things you’d like to do, that you can’t afford to do.”
Isabelle Fleuraud is among the residents of Harney County who are dependent on a federal government paycheck. Her husband is an eco-physiologist with USDA who conducts his research at the Malheur Wildlife Refuge. Fleuraud, who immigrated from France to attend college in Wyoming, teaches yoga and ballet at a dance studio in Burns.
Federal jobs like her husband’s pay better-than-average wages for the area, and typically come with health and retirement benefits that many who work in agriculture and ranching lack. “Antagonism against the federal government is palpable in this region,” said Fleuraud, “and it was this way long before the Bundys showed up. Although it is a ranching community, it is a fact that the public sector drives the economy here. But there is this odd denial of that fact.”

This article, like so many others, makes the case that once the federal presence comes to dominate an area, that that’s it, there is no going back. There can be no re-establishing a balance or returning the private sector to dominance.

Let’s apply this to an urban area.  There is a huge, multi-acre, federal housing project that dominates a neighborhood.  And over time it has become a failure. Mismanagement has led to dilapidated buildings, an unsafe environment for families, corruption and even violence. Would the same pundits say sorry, that’s it, we can’t look at a new model.  Oh, we might “collaborate” more with neighborhood groups, but again – that’s it.

Would they really say we don’t want state and local government, along with the private sector, to take over responsibility, refurbish the buildings and establish an environment that is once again safe for families? Would they say no to all this because it would cause a loss of federal jobs in the area? I don’t think so. And they shouldn’t say no to a similar process taking place in rural areas.
In a way, some of this reminds me of the “broken window” theory as originated by the French philosopher and economist Frederic Bastiat, but restated below by Henry Hazlitt in the classic Economics in One Lesson:

A young hoodlum, say, heaves a brick through the window of a baker’s shop.  The shopkeeper runs out furious, but the boy is gone.  A crowd gathers, and begins to stare with quiet satisfaction at the gaping hole in the window and the shattered glass over the bread and pies.  After a while the crowd feels the need for philosophic reflection.  And several of its members are almost certain to remind each other or the baker that, after all, the misfortune has its bright side.  It will make business for some glazier.  As they begin to think of this they elaborate upon it.  How much does a new plate glass window cost?  Two hundred and fifty dollars?  That will be quite a sun.  After all, if windows were never broken, what would happen to the glass business?  Then, of course, the thing is endless.  The glazier will have $250 more to spend with other merchants, and these in turn will have $250 more to spend with still other merchants, and so ad infinitum.  The smashed window will go on providing money and employment in ever-widening circles.  The logical conclusion from all this would be, if the crowd drew it, that the little hoodlum who threw the brick, far from being a public menace, was a public benefactor.

Now let us take another look.   The crowd is at least right in its first conclusion.  This little act of vandalism will in the first instance mean more business for some glazier.  The glazier will be no more unhappy to learn of the incident than an undertaker to learn of a death.  But the shopkeeper will be out $250 that he was planning to spend for a new suit.  Because he has had to replace the window, he will have to go without the suit (or some equivalent need or luxury).  Instead of having a window and $250 he now has merely a window.  Or, as he was planning to buy the suit that very afternoon, instead of having both a window and a suit he must be content with the window and no suit.  If we think of him as part of the community, the community has lost a new suit that might otherwise have come into being, and is just that much poorer.

The glazier’s gain of business, in short, is merely the tailor’s loss of business.  No new “employment” has been added.  The people in the crowd were thinking only of two parties to the transaction, the baker and the glazier.  They had forgotten the potential third party involved, the tailor.  They forgot him precisely because he will not now enter the scene.  They will see the new window in the next day or two.  They will never see the extra suit, precisely because it will never be made.  They see only what is immediately visible to the eye.

The feds have been “breaking windows” in many parts of the West and we are all poorer as a result.  Isn’t it time we put a stop to this, and let local citizens restore an environment and economy that is conducive to “the pursuit of happiness”?  I say it is way past time.
Note: You can download a free copy of Economics In One Lesson by going here.

Land and Livestock International, Inc. is a leading agribusiness management firm providing a complete line of services to the range livestock industry. We believe that private property is the foundation of America. Private property and free markets go hand in hand—without property there is no freedom. We also believe that free markets, not government intervention, hold the key to natural resource conservation and environmental preservation. No government bureaucrat can (or will) understand and treat the land with as much respect as its owner. The bureaucrat simply does not have the same motives as does the owner of a capital interest in the property. Our specialty is the working livestock ranch simply because there are so many very good reasons for owning such a property. We provide educational, management and consulting services with a focus on ecologically and financially sustainable land management that will enhance natural processes (water and mineral cycles, energy flow and community dynamics) while enhancing profits and steadily building wealth.
View all posts by Land & Livestock Interntional, Inc. →
This entry was posted in Private Property Rights, Public Lands and tagged Private property, public lands. Bookmark the permalink.