Things got contentious during Marc’s appearance on Al Jazeera where Marc said, “The U.S. federal government is out. That is leadership and a rejection of superstition. If we had to rely on the UN and we actually faced a climate apocalypse we would all be doomed.”

To the best of my memory, Trumps rejection of the UN and the Global Warming superstition is the most devastating blow to have ever been delivered against the One World-New World Order in my lifetime. — It has done my soul good. — jtl, 419 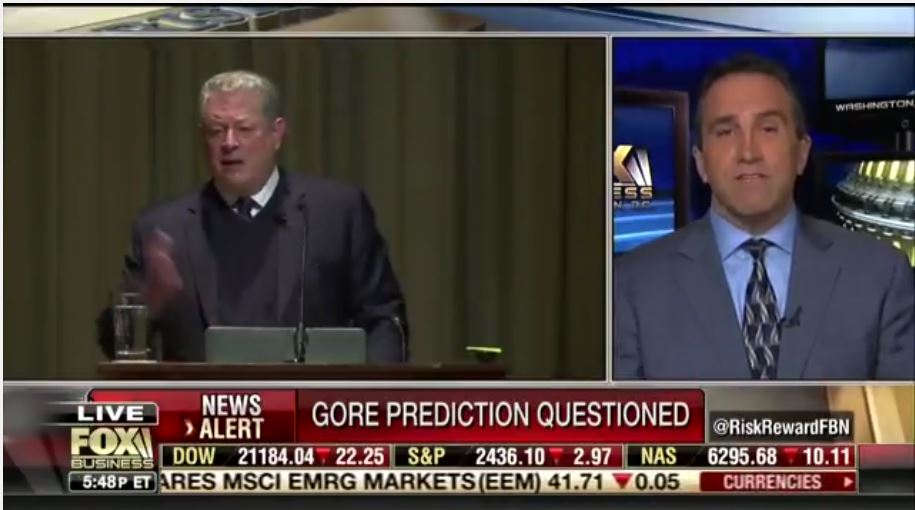 When President Trump yanked America out of the UN’s Paris Accord last Thursday, Climate Depot’s Marc Morano launched into full media overdrive.From major U.S. news outlets like Fox News, the Blaze and American Family Radio, to international broadcasts including Sky News, Al Jazeera, and ‘Good Morning Britain,’ among others, Marc has been hitting the airwaves taking on Green spokesman and passionately and articulately defending the President’s wise choice to exit the Paris agreement.

Yesterday, Morano refuted Al Gore and John Kerry on Fox saying, “Donald Trump made the best deal by walking away from the table when the premise is absurd, that the United Nations is going to save the planet through regulation, central planning and wealth redistribution.”

Things got contentious during Marc’s appearance on Al Jazeera where Marc said, “The U.S. federal government is out. That is leadership and a rejection of superstition. If we had to rely on the UN and we actually faced a climate apocalypse we would all be doomed.”

Marc Morano speaking on the air about climate is like an anti-propaganda vaccination.

Green-Left spokesmen, not used to being aggressively challenged, are often left looking like they’ve been hit by a tornado.

Take a look at the roundup below of some of Marc’s most recent media interviews and reports.

CFACT has been busy laying out the facts – and now is the time to go on the offensive.

Once people become acquainted with the truth about this climate hustle its tough for the warming crowd to bamboozle them again.

For nature and people too, 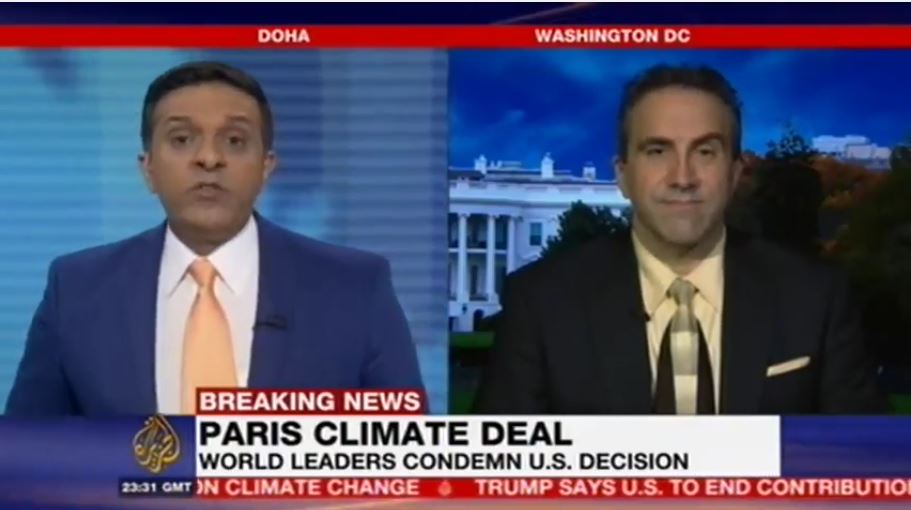 Watch: Morano in Sky News TV debate with Greenpeace: ‘It’s the greatest thing for the U.S. to leave Paris pact’ – Broadcast June 1, 2017 -Sky News -Marc Morano vs. Sky News Anchor Kay Burley and a Kaisa Kosonen, a spokesperson from Greenpeace International. Morano: ‘This treaty has no basis not only in science, but in actual cost benefit analysis. Even if you use all the UN assumptions and believe everything they claim about the science, you would not be able to measure the temperature difference in a 100 years assuming all the countries did what thy planned to do…If we did face a climate apocalypse, you don’t need the UN to sit there and decide what energy mix countries should have. UN bureaucrats don’t have to be in charge. You don’t need central planning to determine that.

Watch: Morano on Newsmax TV: UN Paris Accord Is About Wealth Redistribution, Not Climate – Morano on Newsmax TV’s Steve Malzberg show: “The UN has actually admitted the real reason for the treaty. They said this is not even environmental policy anymore, we will redistribute wealth by climate policy. That’s what they want, a $100 billion a year slush fund going to governments that are best able to keep your people locked in poverty. “This is all about social engineering, central planning, redistribution of wealth, and empowering UN bureaucrats.”

Morano on Blaze TV: ‘We are going to have a Clexit! A climate exit!’Watch Morano on One America TV: Trump touched on ‘religious belief’ – It’s a ‘theological debate’ on climate – Tipping Point With Liz Wheeler on OAN (One America News Network) – Morano: ‘What Trump did today was a blow to superstition. No longer in Washington DC do we have to pretend that a UN climate treaty can save the planet or actually control temperature or impact storminess. This truly is a day that science has won out in DC and that is a rare day when it comes to climate change.’

Trump stomps on climate religion, withdraws from UN pact – Special Report – Morano: ‘This is very close to a religious issue. This is a theological issue. People take climate change that seriously.’ ‘We are proud of a president who is staring at the UN and saying we don’t want to give up our sovereignty so that UN bureaucrats can redistribute our wealth and do nothing for the climate. This is a great day for science.’

CHRIS WALLACE: “You would agree that even if all 195 nations, now 194, met their targets, it still wouldn’t solve the problem.”

AL GORE: “That is correct. However, it sends a very powerful signal to business and industry and civil society, and countries around the world.”

The Earth’s climate continues to defy Al Gore’s claims. Despite what Gore claimed on Fox News today, the scientific reality show Gore is wrong.  Reality Check on Gore 2017: Greenland Ice Mass Increases To Near Record – Sea level rise in the Miami area is not accelerating and it is rising at a rate of about 1 foot per century. – Sea levels have been rising since the last ice age ended more than 10,000 years ago. There is currently no acceleration in sea level rise. – Analysis: Nearly all extreme weather is declining or at or near record lows

Washington Times Features Climate Depot: Marc Morano, publisher of the influential Washington DC-based Climatedepot.com fears that is the case. “It seems that the Fairbanks Declaration was Tillerson testing how far he can push,” said Mr. Morano. “And given all of the disastrous distractions the Trump administration is currently undergoing, Mr. Tillerson likely will be able to push all the way to staying in the U.N.Paris agreement.” Mr. Morano, also the author of a new report offering “talking points” on global warming for policymakers who contest the climate scare, concluded, “The administration is not seizing the moment on the Paris Agreement and few conservatives are holding them to account. If we don’t get rid of Paris now, we may never get rid of it and it may strengthen during next presidency.”

All unclassified Army and Marine Cops manuals and correspondence courses are products of the US Federal Government. They are NOT subject to copyright and can be freely copied and redistributed.

The Marine Corps Institute (MCI) develops correspondence courses for Marines with all kinds of Military Occupational Specialties (MOS) on all manner of subjects. This is one of those courses.

The print is relatively small because that is the way it was in the original and this is an exact reproduction. Also, as a tribute to the individual (and a touch of reality), you will notice that the editorial pencil marks and underlined passages that were put there by the Marine that took this course. They were intentionally left in the reproduction.

This version of the course was authorized in September of 1984. With the exception the development of Infrared technology, it contains information and techniques that have changed very little since the Vietnam war. These battle proven tactics are as valid today as they were in Quang Nam province in 1968.

They will maintain their validity during the upcoming inevitable event of total economic, political and social collapse. Yours for freedom in our lifetimes. jtl, 419

Land and Livestock International, Inc. is a leading agribusiness management firm providing a complete line of services to the range livestock industry. We believe that private property is the foundation of America. Private property and free markets go hand in hand—without property there is no freedom. We also believe that free markets, not government intervention, hold the key to natural resource conservation and environmental preservation. No government bureaucrat can (or will) understand and treat the land with as much respect as its owner. The bureaucrat simply does not have the same motives as does the owner of a capital interest in the property. Our specialty is the working livestock ranch simply because there are so many very good reasons for owning such a property. We provide educational, management and consulting services with a focus on ecologically and financially sustainable land management that will enhance natural processes (water and mineral cycles, energy flow and community dynamics) while enhancing profits and steadily building wealth.
View all posts by Land & Livestock Interntional, Inc. →
This entry was posted in Climate Change, Global Warming, One World Government and tagged Agenda 21, New World Order, One World Government, Paris. Bookmark the permalink.