The Gospel of the New World Order

No American evangelist did more to promote the dumbed-down universalist form of Christianity than Billy Graham. What is the universalist form of Christianity? It’s the belief that all men are or will be saved or redeemed, regardless of creed… Universalism requires that we dismiss God’s word as The Truth and instead accept that it is a malleable set of guidelines or nothing more than a cafeteria line from which we can pick and choose what we want to be true and what we don’t. This is a pseudo-Christian front that is very much a part of the world system and an antichrist.

I consider myself a Christian, although I have not (and never will) become a “member” of any organized religious group. There are (at least) two reasons for this: 1) dogma and 2) hypocrisy.

Over the years I have struggled with several questions. For example: How is it that what is supposed to be a loving God can (or would) condemn someone’s

soul to an eternal frying pan hell just because he/she had never so much as heard of Jesus Christ?

Never did it ever dawn on me that there might be a connection with that view and the One World–New World Order which was (is) to me the personification of Satan himself.

by Bob Livingston at Personal Liberty 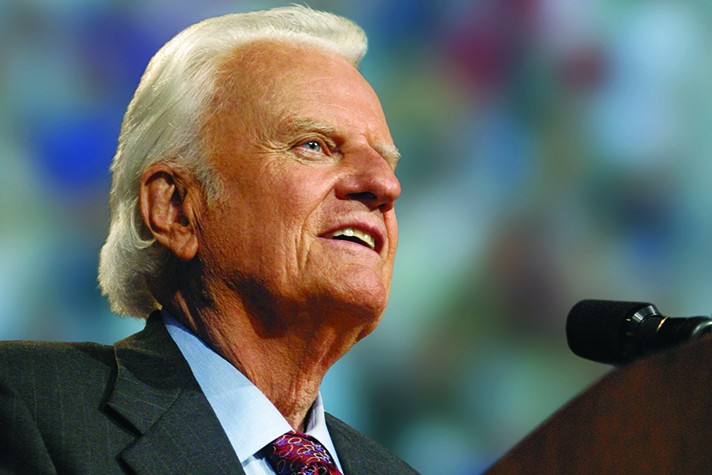 “The Rev. Billy Graham, a North Carolina farmer’s son who preached to millions in stadium events he called crusades, becoming a pastor to presidents and the nation’s best-known Christian evangelist for more than 60 years, died on Wednesday at his home in Montreat, N.C. He was 99.” And thus spake the newspaper of record in leading the way of the mainstream media’s lionization of Billy Graham. But does he deserve the accolades he’s getting from the people and mainstream media?

In a May 31, 1997 interview on the Hour of Power television program, Graham stated, “Well, Christianity and being a true believer, you know, I think there’s the body of Christ which comes from all the Christian groups around the world, or outside the Christian groups. I think that everybody that loves Christ or knows Christ, whether they’re conscious of it or not, they’re members of the body of Christ. And I don’t think that we’re going to see a great sweeping revival that will turn the whole world to Christ at any time.

“What God is doing today is calling people out of the world for His name. Whether they come from the Muslim world, or the Buddhist world, or the Christian world, or the non-believing world, they are members of the body of Christ because they’ve been called by God. They may not even know the name of Jesus, but they know in their hearts they need something that they don’t have and they turn to the only light they have and I think they’re saved and they’re going to be with us in heaven.”

In Newsweek magazine, April 26, 1982, Graham is quoted in a debate on the issue of Biblical infallibility: “I believe the Bible is the inspired, authoritative word of God but I don’t use the word inerrant because it’s become a brittle divisive word.”

In the United Church Observer in an article titled, “Billy Graham Answers 26 Provocative Questions,” Graham responded to a question about whether belief in a virgin birth is essential to salvation this way: “While I most certainly believe that Jesus Christ was born of a virgin, I do not find anywhere in the New Testament that this particular belief is necessary for personal salvation.”

“I think Islam is misunderstood, too,” Graham told David Frost in an appearance on his program on May 20, 1997. “Mohammad had a great respect for Jesus, and he called Jesus the greatest of the prophets except for himself. And I think that we’re closer to Islam than we really think we are.”

Universalism requires that we dismiss God’s word as The Truth and instead accept that it is a malleable set of guidelines or nothing more than a cafeteria line from which we can pick and choose what we want to be true and what we don’t. This is a pseudo-Christian front that is very much a part of the world system and an antichrist.

It turns us into a people of no opinion, no standards and no Christian morality. We no longer can differentiate good from evil and instead become “accepting” and “tolerant” of sinful behavior above all else, especially repentance, baptism and obedience – which are the requirements of salvation.

Following is an article I wrote about Graham in my monthly newsletter, The Bob Livingston Letter™ (subscription required) in June, 1998, under the title of The Gospel of the New World Order. I believe it to be as true today as I did then.

Who has been given national media coverage for 40 years? Who has been a personal friend to four United States Presidents? Who appeals to all faiths equally to join together? Who gives immorality his blessings? Who invites gays and lesbians into the church “just as they are?”

Billy Graham wears the ecclesiastical cloak of the political order. He is the spokesman for organized religion. He represents the state religion in America. He is a disgrace to scriptural truth.

As far as we are concerned, Billy Graham is an adept chosen and crowned by the hidden powers who rule the United States and the world.

His wide acceptance as a “Christian evangelist” in America demonstrates the amorality of the professing Christians who adore him.

Billy Graham welcomes all depravity into the Christian fold and calls it God’s love. He wears the crown of the God of this world. He is chosen by the elite as the universal pontiff of Protestantism.

Graham once stated, “Someday you will read or hear that Billy Graham is dead — don’t you believe a word of it. I shall be more alive than I am now. I will just have changed my address. I will have gone into the presence of God.”

I pray for  his sake that it’s true, but unless  he repented from his  years of false teaching, I doubt that it’s so.

Land and Livestock International, Inc. is a leading agribusiness management firm providing a complete line of services to the range livestock industry. We believe that private property is the foundation of America. Private property and free markets go hand in hand—without property there is no freedom. We also believe that free markets, not government intervention, hold the key to natural resource conservation and environmental preservation. No government bureaucrat can (or will) understand and treat the land with as much respect as its owner. The bureaucrat simply does not have the same motives as does the owner of a capital interest in the property. Our specialty is the working livestock ranch simply because there are so many very good reasons for owning such a property. We provide educational, management and consulting services with a focus on ecologically and financially sustainable land management that will enhance natural processes (water and mineral cycles, energy flow and community dynamics) while enhancing profits and steadily building wealth.
View all posts by Land & Livestock Interntional, Inc. →
This entry was posted in New World Order, Uncategorized and tagged Agenda 21, Christianity, culture war, New World Order, One world order. Bookmark the permalink.

1 Response to The Gospel of the New World Order