Can A Sign Revoke Government’s Implied License To Trespass?

Even a layman can understand that when “use” is severely restricted or taken, ownership becomes a barren right.  If property ownership is a “barren” right, then private citizens have no right to own property.  If a private citizen has no right to own property, then it follows that Government “owns” all property and in fact it does.  Just try not paying your property taxes and the government will TAKE your property.

Take, for example, the federal income tax. Who sets the tax rates? The government, of course. Are they “authorized” (by their law) to set the rate at 100%. Of course they are. Do you really “own” anything? Of course you don’t. Are you happy? If so, rattle your chains. The National Association of Rural Landowners (NARLO) (www.narlo.org) is a good outfit. I have a couple of their signs and highly recommend them. – jtl, 419
by Ron Ewart  via News With Views

For decades, government’s power, at every level, has increased exponentially to the point where the people are no longer sovereign.  They are but hapless “victims” of a centralized government whose constitutional limits were breached beginning as far back as the Civil War.  The people of America, thanks to the 14th Amendment, are now just “citizens UNDER THE JURISDICTION THEREOF of the United States and of the State wherein they reside.”  It was supposed to be that the United States and the State wherein we reside were under the JURISDICTION of WE THE PEOPLE, not the other way around.

Then along came the 16th Amendment (1913), which made those “citizens under the jurisdiction thereof” human collateral for the nation’s debt.  Without knowing it the people were forced to pledge the taxes from their entire life’s income to the government.  In the 1930’s FDR sealed the deal by making each individual’s Social Security number the loan number for that debt.  At that time, the people of America ceased being sovereign with individual and unalienable rights.  Some of you may remember when Social Security was supposed to be voluntary.  It is no longer.  Some may remember when Social Security benefits weren’t taxed.  They are now. Government’s growing power has increased dramatically in the intervening years, while the people sat on their hands and did nothing. 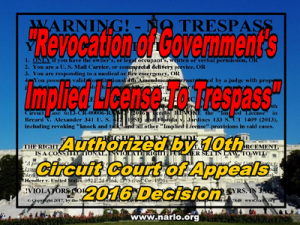 In another decision the U. S. Supreme Court determined that before a government TAKING could occur in which 5th Amendment “just compensation” would have to be paid, the government could take up to 95% of an owner’s property, or the right of use of an owner’s property.  When environmental protection laws were passed in the early 1970’s it meant that the government could stop a landowner from using up to 95% of his or her property for environmental reasons before government would have to pay.  Government might just as well confiscate all of a person’s property, since 95% is essentially all of a person’ property.  Even though you lose the right of use of your property from government action, you still have to pay property taxes for the entire property.  The elimination of property rights continued un-abated by Congress and the High Court in coming years.

Originally, the intent of the Founding Fathers was that property ownership was to be virtually sovereign title and government could not interfere or subvert that title.  The right to own and use your property, without interference from government, was the foundation from which all other natural rights sprung.  It was and is called allodial title.   Again, the government came along and silently and seriously diluted allodial title by converting all title deeds to Statutory Warranty Deeds.

Here is a legal definition of property rights and property ownership, as drafted by a State Supreme Court Justice.

“While it is up to each state to define property for itself, the right to use one’s property has been universally understood to be a fundamental attribute of real property ownership.  Compare Eaton v. Boston, C. and M.R.R., 51 N.H. 504, 511-512 (1872) (“the framers of the Constitution intended to protect property rights which are worth protecting; not mere empty titles . . . among those elements is, fundamentally, the right of use . . . “) and Lord Coke wrote that: “to deprive one of the use of his land is depriving him of his land.  What is the land but the profits thereof?” (See also John M. Groen and Richard M. Stephens, Takings Law, Lucas, and the Growth Management Act, 16 U. Puget Sound L. Rev. 1259, at 1266, 1295 (Spring 1993)).”

Even a layman can understand that when “use” is severely restricted or taken, ownership becomes a barren right.  If property ownership is a “barren” right, then private citizens have no right to own property.  If a private citizen has no right to own property, then it follows that Government “owns” all property and in fact it does.  Just try not paying your property taxes and the government will TAKE your property.  Allodial property rights are no more.

Many in government and the environmental community actually believe that government should own all property and would like to see this to be the final outcome of private property in America today, the Constitution be damned.    The United Nations believes and has stated in a policy pronouncement that the environmental value of property is too high to allow private individuals to own property and only government should own property.  (We cover much about American property rights on our web page HERE.)

But one of the other basic pillars of property ownership in America is the right to exclude anyone from coming on your property and that means anyone, including government agents and law enforcement.  That right to exclude was codified into law in the following precedent:

However, in 2016, a 10th Circuit Appeals Court took aim at the “knock and talk” law and provided a mechanism for landowners to REVOKE government’s “Implied License” to TRESPASS on your property at any time.

For over 12 years the “National Association of Rural Landowners“ has provided a very powerful, legally intimidating 18″ x 24″ copyrighted “No Trespassing sign“ to landowners all over America.  Over 7,000 of these larger signs have been installed on private property in every state.  In our continuing search for stronger No Trespass language we kept looking for legal language that would revoke the government’s “knock and talk” right to trespass on your land.  Upon reading the not-well-known 2016 10th Circuit Court of Appeals decision, we found the legal authority to revoke government’s right and incorporated that authority in a “Revocation of Implied License” and “Right to Exclude” companion 12″ x 18″ copyrighted No Trespass sign.  Our two signs (large and small) are designed to work together, or separately, but they have more legal authority when installed together in accordance with the 10th Circuit Appeals Court decision.  You won’t find these two copyrighted signs available anywhere else.

America has evolved to the point that all government believes they have the absolute authority and right to trespass on your land at any time.  Under the Constitution and precedent law they don’t!  Some state and local governments have tried to pass ordinances forcing the landowner to provide an easement so that government can trespass legally.  We strongly advise against it or you will throw what little property rights you have left to the winds and find some nosy government agent looking in your bedroom window.

If you live in an apartment none of this has any meaning for you.  However, if you are an urban or rural property owner, you owe it to yourself to investigate our two powerful No Trespassing signs to see if they are applicable to your situation.  We have incorporated a link to the entire 10th Circuit Court of Appeals decision on our “Revocation of Implied License” web page so that you can see for yourself that the revocation of implied license authority granted in the decision is genuine.

If you have been the target of an unwanted visit by a government agent or law enforcement officer, you are going to want these No Trespassing signs.  If you haven’t had that experience, you will eventually and our powerful No Trespass signs could stop that visit.

You have a choice.  Either protect your rights, or give them up all together.

If you have questions or comments, you can contact us HERE.

Ron Ewart, a nationally known author and speaker on freedom and property rights issues and author of this weekly column, “In Defense of Rural America”. Ron is the president of the National Association of Rural Landowners (NARLO) (www.narlo.org), a non-profit corporation headquartered in Washington State, acting as an advocate and consultant for urban and rural landowners. Affiliated NARLO websites are “SAVE THE USA” and “Getting Even With Government”. Email: info@narlo.org Website: http://www.narlo.org

Land and Livestock International, Inc. is a leading agribusiness management firm providing a complete line of services to the range livestock industry. We believe that private property is the foundation of America. Private property and free markets go hand in hand—without property there is no freedom. We also believe that free markets, not government intervention, hold the key to natural resource conservation and environmental preservation. No government bureaucrat can (or will) understand and treat the land with as much respect as its owner. The bureaucrat simply does not have the same motives as does the owner of a capital interest in the property. Our specialty is the working livestock ranch simply because there are so many very good reasons for owning such a property. We provide educational, management and consulting services with a focus on ecologically and financially sustainable land management that will enhance natural processes (water and mineral cycles, energy flow and community dynamics) while enhancing profits and steadily building wealth.
View all posts by Land & Livestock Interntional, Inc. →
This entry was posted in Private Property Rights, Uncategorized and tagged private property rights. Bookmark the permalink.

3 Responses to Can A Sign Revoke Government’s Implied License To Trespass?