The news media isn’t in the business of telling us about what didn’t happen. The media is biased to sell fear and outrage. They sell emotion, not information.

Call for a cop, an ambulance or a pizza and see which one arrives first. — jtl, 419

by Rob Morse at Slow Facts

I research news stories of civilian self-defense. These events receive relatively little media coverage. We had some significant cases in just the last few weeks. I’ll give you the details, but first let me explain why these stories are important.

Timeline-  There are about 20 million citizens licensed to carry a concealed weapon in public. Per person, there are more armed civilians in states like Indiana and Alabama than in states like New Jersey and California. On average, an armed civilian is much closer to you than the police. That matters when time is critical. Seconds count during an attack.

Violent assaults come as a surprise.
“Bang.” What was that? Was it a gunshot?
“Bang” That guy is shooting people. What should I do?

Most people run. Some armed defenders will move toward the gunfire and stop the attacks. That is what good guys do.

If you are a disarmed civilian then you run until you feel safe. A few

minutes later once you’ve regained your wits, you remember to call the police. The average police response time is twelve and a half minutes starting from when they receive the phone call. The murderer may shoot at will until he is confronted. The police may, or may not, advance on an armed gunman. On average, there are an additional 12 victims if we wait for the police to arrive. The cops I’ve met would do anything to stop the attack.

Think of the victims we don’t see. If there is an armed civilian responder on the scene, then think of the dozen who were saved and who never make the news. The victims that never happened that makes these such extraordinary stories.

Why didn’t you know about the dozen people saved?

The news media isn’t in the business of telling us about what didn’t happen. The media is biased to sell fear and outrage. They sell emotion, not information. If you doubt that claim then please consider this.

The bias is well know. “If it bleeds, it leads.”

There is also a second type of subtle bias at play. I know several recent instances when there were several independent civilian defenders who responded to the same violent attack. Each defender acted alone. They all moved towards the sounds of screams and gunfire as they converged on the attacker. One of these defenders shot first. In that moment, the other defenders become invisible to the news media.

In fact, these armed defenders are out there with us all the time. They are concealed rather than invisible. Here are the two of the recent events I had in mind where multiple “invisible” armed civilians stopped an armed murderer. 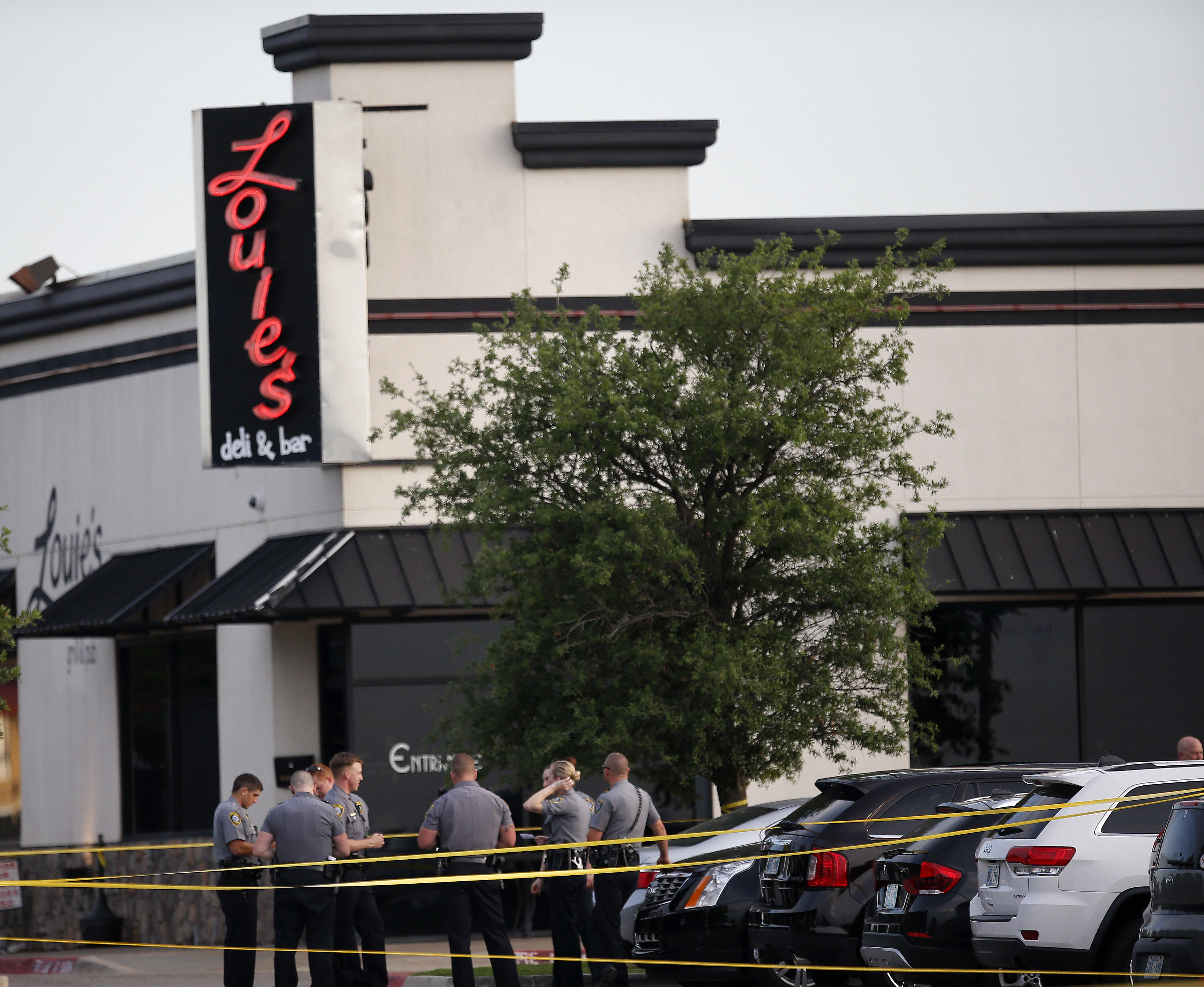 Photo from the Mercury News

Louie’s Grill & Bar, Lake Hefner, Oklahoma City, OK-  At the end of May, a mentally ill man walked into a lakeside restaurant. He complained of hearing demons in his TV and from his computer. The murderer walked inside the restaurant and shot three strangers, a mother and her two young daughters. Patrons ran and hid. The restaurant is posted as a “gun-free” zone so there were no armed defenders inside. Two of our invisible defenders ran to their cars and got their guns. They followed the attacker through the restaurant and shot him. They did not shoot each other. Photo from the Seattle Times

Walmart store, Tumwater, WA-  In the middle of June, an armed criminal carjacked a 16 year old girl. Some news reports describe the young woman as having been shot while other reports say she suffered only minor injuries. The criminal drove the stolen car to a nearby Walmart. He walked inside the store and shot a display case several times. The shoppers fled from the store and ran into the parking lot. The criminal carjacked a second person outside the store. This time, we know the criminal shot the owner of the car. News reports say that armed civilians converged on the criminal and shot him. Conflicting reports credit two defenders while some reports indicate there were as many as three armed defenders. Later news reports, now confirmed, said that one of the armed defenders got a medical kit from his car and applied first aid to the seriously wounded victim of the carjacking. The victim survived the attack.

One of the armed defenders happened to be in the store parking lot with his family. There was no sign that trouble was on the way. Like many other examples, this looked like an ordinary afternoon, yet these defenders chose to go armed anyway. They saved many innocent lives as a result.

You could do that too.

I thank those of you who carry concealed. You may be invisible to the media, but you made a visible difference here.

Land and Livestock International, Inc. is a leading agribusiness management firm providing a complete line of services to the range livestock industry. We believe that private property is the foundation of America. Private property and free markets go hand in hand—without property there is no freedom. We also believe that free markets, not government intervention, hold the key to natural resource conservation and environmental preservation. No government bureaucrat can (or will) understand and treat the land with as much respect as its owner. The bureaucrat simply does not have the same motives as does the owner of a capital interest in the property. Our specialty is the working livestock ranch simply because there are so many very good reasons for owning such a property. We provide educational, management and consulting services with a focus on ecologically and financially sustainable land management that will enhance natural processes (water and mineral cycles, energy flow and community dynamics) while enhancing profits and steadily building wealth.
View all posts by Land & Livestock Interntional, Inc. →
This entry was posted in Gun Control, Uncategorized and tagged concealed carry, Gun Control. Bookmark the permalink.