Communists Working For Decades On Taking Over United States

This country is overflowing with an exponential increase in chaos, which is one of the goals of the looney left.

Decades? It is more like centuries. If you don’t believe me, ask Al Benson, Jr.

Folks, I sincerely hope and pray that I am dead wrong. But I don’t think I am. The one and only “solution” will be blood in the streets. Anybody got any other “theories?” If so, I would sincerely love to hear them, provided they are substantiated with evidence. — jtl, 419

by Donna Wasson at News With Views

What Else Do You Expect?

OK, I gotta to chime in here for a minute to put in my two-cent’s worth. I’m sure you’ve noticed how nuts this world has gotten; how unhinged and just plain insane some people have become. To be honest, I have to take the news in small doses these days. The deafening, perpetual hysterics the media bombards us with 24/7, gets to be too much for me to absorb. It makes me want to jump in bed and hide under the covers.

Between working full-time, caring for my household chores, husband, son, dogs, cat, bearded dragon, and finally moving my elderly Mom in to live with us, I sometimes feel close to flipping out, and the desire to run away hits me. But to my horror, it occurred to me: There’s nowhere to go! Think about that for a minute.

I can’t escape to Europe—they’re overrun by muslim sheet-heads, hellbent on conquering the infidel countries they’ve invaded. Can’t go to Latin America, with the drug cartels slicing people up with machetes in the streets, and corrupt government officials stealing from their own people. Africa is no vacation spot, with its civil and racial violence.

Canada’s Prime Minister is a bubble headed, socialist ‘himbo’–the male version of a bimbo. Russia? What a dismal existence those poor folks have. No thanks. Most of Asia is desperately poor with either muslim or communist rulers, so I’ll pass on that. The Middle East? HAHAHA! ‘Nuff said. The Philippines and China just got slammed with the worst typhoon in recorded history, and America has gotten smacked with coast-to-coast natural disasters, from the destruction of Hawaii’s volcanic lava flow, to the current horror in the Carolinas.

Nope. There’s nowhere to run. No place I can go to be free from the monotonous verbal diarrhea of progressive imbeciles, or the millennial-age ignorance, insolence and arrogance displayed by the most useless, whiny generation to ever grace this planet. Social Justice Warriors Antifa, run around with their cowardly faces masked, spewing exaggerated rage and violence, calling everyone ‘fascist’ when they don’t even know the definition of the word. Precisely what do they hope to accomplish?

The left-wing morons march about with their professionally printed signs, and a fat check from the DNC in their pocket, blathering rabid, vitriolic hatred against a President who has greatly stimulated the economy, created an abundance of job opportunities, and caused this country to be respected again by world leaders. Despite a plethora of evidence to the contrary, that poor man is endlessly accused of being homophobic, misogynistic, and racist, and because of him, we’re all going to explode and die.

This country is overflowing with an exponential increase in chaos, which is one of the goals of the looney left. They call for Trump’s impeachment, but never detail or produce evidence of what ‘high crimes and misdemeanors’ he’s committed. They’ve got nothing. No supposed collusion. No taking bribes under the table. His transgression?

He had the audacity to speak the unvarnished, politically incorrect truth, resulting in his election by the grace of Almighty God, upsetting their Globalist agenda to complete the demise of America. The Hildabeast STILL gets bug-eyed, and foams at the mouth when she thinks of her humiliating defeat, the thought of which always makes me smile. She hyperventilates over the fact that she lost the Golden Ring to the Champion of the Deplorables! HA!

The demons that control and influence these circus freaks are throwing epic temper tantrums because they know they’re finally on the cusp of seeing the rise of their man-of-the-hour, the antichrist, and they want no more delays. They salivate at the prospect of running amok, ruling the earth, causing death, destruction and mayhem. It’s what they do. It’s detailed in their job description, and they do it well.

I could go on and on, but you get the picture. I have every idea many of you are feeling squeezed and stressed as well. We who belong to the King of Kings are not alone, and our cries to heaven are being heard. Check this out: “We are troubled on every side, yet not distressed; we are perplexed, but not in despair; Persecuted, but not forsaken; cast down, but not destroyed;” 2 Corinthians 4:8-9.

Paul experienced the same distress from the idiots he rubbed shoulders with, that we feel today. At least WE aren’t in danger of going to prison or being flogged for our faith! Not yet, anyway. There are believers in this world who face horrific situations every day. All we’re forced to do in America is endure the blithering, drooling stupidity of ‘Democratic Socialists.’ The very term is an oxymoron. Why don’t they cut the baloney and refer to themselves as they really are?

They’ve been working on taking over the United States for decades.

Please review the following information and see just how much they’ve accomplished while we’ve been busy, working to get ahead, buy more stuff, and raise our families, foolishly forgetting God in the process.

The 45 communist goals as read into the congressional record 1963

After reading that, and considering the degradation of society across the world, I ask you: What else do you expect? Those of us who’ve been watching and waiting for the snatching away of the Bride for untold years, have warned until we’re blue in the face, that we ARE indeed living in the very last days. I would venture to say we’re now in the last seconds of the Age of Grace! Things are shaping up nicely in the end-times prophetic sphere, so to those of you ready to ditch this joint and go home, keep looking up! Our redemption really is drawing close.

To the lost, let me caution that the disasters and destruction we’ve seen in Hawaii and now in the Carolinas, is just the beginning of God’s judgment on a country once blessed and protected like none other; on a people who deliberately walked away from the faith of her Founding Fathers, and who now casually blasphemes the holy name of YWHW and His Son.

Oh yes folks, more destruction is coming—much more, so prepare your hearts. Repent, repent, repent, because tomorrow is promised to no man. Any one of us could instantly be taken into eternity in a car crash, natural disaster, sudden illness, or the violence that’s so prevalent on our streets.

I guarantee the antichrist is standing in the wings, straightening his tie, ready to walk out on the world stage and take control, so you’d better believe this: Jesus IS coming very soon. “Watch ye therefore, and pray always, that ye may be accounted worthytoescape all these things that shall come to pass, and to stand before the Son of man.” Luke 21:36.

Will YOU be found worthy?? 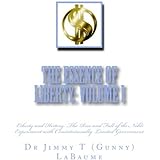 The Essence of Liberty: Volume I: Liberty and History: The Rise and Fall of the Noble Experiment with Constitutionally Limited Government.  Read More

Land and Livestock International, Inc. is a leading agribusiness management firm providing a complete line of services to the range livestock industry. We believe that private property is the foundation of America. Private property and free markets go hand in hand—without property there is no freedom. We also believe that free markets, not government intervention, hold the key to natural resource conservation and environmental preservation. No government bureaucrat can (or will) understand and treat the land with as much respect as its owner. The bureaucrat simply does not have the same motives as does the owner of a capital interest in the property. Our specialty is the working livestock ranch simply because there are so many very good reasons for owning such a property. We provide educational, management and consulting services with a focus on ecologically and financially sustainable land management that will enhance natural processes (water and mineral cycles, energy flow and community dynamics) while enhancing profits and steadily building wealth.
View all posts by Land & Livestock Interntional, Inc. →
This entry was posted in Culture War, Uncategorized and tagged culture war. Bookmark the permalink.