Jordan Peterson and His Enemies

A while back, I asked a former college president what she thought of Peterson…. I brought up the lobsters. Lobsters have been doing status and power contests for 350 million years and are a theme in 12 Rules for Life. … “They should rename my New York neighborhood Lobster Cove,” I laughed. She didn’t. For academics, social class, hierarchy, and status are touchy subjects, like sex and death in earlier times. Her ideological Geiger counter had started ticking. She looked uncomfortable, and we moved on.

The Canadian psychologist has set off left-wing ideological Geiger counters around the world, and for good reason. — jtl, 419

By Gilbert T. Sewall at The American Conservative

Jordan B. Peterson has sold over half a million volumes of 12 Rules for Life: An Antidote to Chaos since January, a staggering number of books. His yearlong “Antidote to Chaos” speaking tour is even more remarkable. In December, he will speak to an already sold out 2,000-seat Orpheum Theater in Los Angeles. His tickets are fetching up to $900 each, prices comparable to Bruce Springsteen and Hamilton. Before that, he’ll speak to audiences in Europe from Helsinki to Stockholm.

A while back, I asked a former college president what she thought of Peterson. To my surprise she drew a blank. He was saying sensible things about hierarchy, gender, and coping with life’s limits, I explained. He was dispensing good advice, some of it aimed directly at feckless young men.

I brought up the lobsters. Lobsters have been doing status and power contests for 350 million years and are a theme in 12 Rules for Life. Their neural systems are primitive analogues of our own. Just maybe, Peterson

speculates, such status and power contests apply to more advanced animal behavior, to humans, to us. “They should rename my New York neighborhood Lobster Cove,” I laughed. She didn’t. For academics, social class, hierarchy, and status are touchy subjects, like sex and death in earlier times. Her ideological Geiger counter had started ticking. She looked uncomfortable, and we moved on. 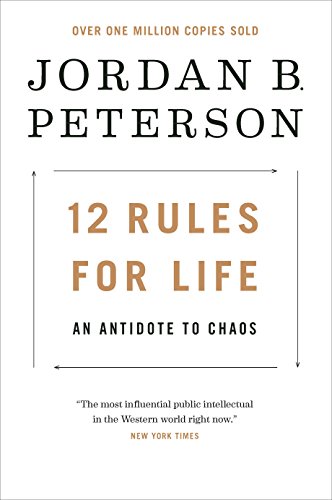 Peterson’s freewheeling mindset, challenging academic follies, intrigued me from the start. His Jungian perspective is deeply persuasive, linking the present to history and age-old human dilemmas. Through archetypes, Peterson charts a life that is not miserable, supplicating, and unfulfilled, albeit one of tragic consciousness.

Practiced with wary, distrustful paranoiacs, the 56-year-old University of Toronto psychology professor stirs confidence even among skeptics and agnostics. He has an eye for the manipulative and false. Early in his book tour, Peterson stopped an obnoxious Channel 4 News television interviewer’s feminist harangue cold, crisply and rather graciously. The exchange went viral and helped make his book a runaway bestseller. He has since drawn respectful profiles in The New Yorker, The Atlantic, and Esquire. His fans include two straight-talking social critics, Camille Paglia and Jonathan Haidt.

Caught in its own favored ideologies and idées fixes, the nation’s thought establishment was late to grasp Peterson’s phenomenal ascent. Using 21st-century media and the internet, he has built a worldwide platform that disputes progressive totems, ridiculing the invisible knapsack of white privilege, for example, and exposing postmodernism’s subtexts and tyrannies. Five years ago, Peterson started uploading old classroom lectures to YouTube. More than 300 have been posted to date and he has over 1.5 million YouTube subscribers.

People like to listen to what Peterson has to say. Audiobooks are reportedly an unusually large share of his book sales. On YouTube videos and in stage appearances, he comes off by turns as breezy, blunt, witty, and profound. He wants to help, filling in listeners on how the cold, cruel world works and the malevolent possibilities contained in human shadows. Two admirers I know are older women, one a child psychiatrist who sees kids damaged by lax parenting and indiscipline, the other a Los Angeles therapist familiar with anguished young women choosing careers over motherhood.

I am a reader, not a watcher or listener, so all the YouTube lectures, podcasts, and $900 tickets in the world won’t help me. Until Google fired James Damore ignominiously in 2017 for his gender memo, I didn’t know that Peterson’s lectures had garnered a huge following. Damore chose Peterson to make his case to in a memorable online exchange. That should suggest the caliber of his adherents.

The Essence of Liberty Volume III: Liberty: A Universal Pvolitical Ethic. This is the volume that pulls it all together. With reference  to Hans-Hermann Hoppe’s description of Murray Rothbard’s work, it is a “unique contribution to the rediscovery of property and property rights as the common foundation of both economics and political philosophy, and the systematic reconstruction and conceptual integration of modern, marginalist economics and natural-law political philosophy into a unified moral science: libertarianism.” Available in both paperback and Kindle versions.

Land and Livestock International, Inc. is a leading agribusiness management firm providing a complete line of services to the range livestock industry. We believe that private property is the foundation of America. Private property and free markets go hand in hand—without property there is no freedom. We also believe that free markets, not government intervention, hold the key to natural resource conservation and environmental preservation. No government bureaucrat can (or will) understand and treat the land with as much respect as its owner. The bureaucrat simply does not have the same motives as does the owner of a capital interest in the property. Our specialty is the working livestock ranch simply because there are so many very good reasons for owning such a property. We provide educational, management and consulting services with a focus on ecologically and financially sustainable land management that will enhance natural processes (water and mineral cycles, energy flow and community dynamics) while enhancing profits and steadily building wealth.
View all posts by Land & Livestock Interntional, Inc. →
This entry was posted in Political Correctness, Uncategorized and tagged Jordan Peterson., Political Correctness. Bookmark the permalink.

1 Response to Jordan Peterson and His Enemies